skip to main | skip to sidebar

...this describes my journey perfectly!

Hope and the magic lottery


Entrepreneurial hope is essential. It gets us over the hump and through the dip. There's a variety of this hope, though, that's far more damaging than helpful.

This is the hope of the magic lottery ticket.

A fledgling entrepreneur ambushes a venture capitalist who just appeared on a panel. "Excuse me," she says, then launches into a two, then six and eventually twenty minute pitch that will never (sorry, never) lead to the VC saying, "Great, here's a check for $2 million on your terms."

Or the fledgling author, the one who has been turned down by ten agents and then copies his manuscript and fedexes it to twenty large publishing houses--what is he hoping for, exactly? Perhaps he's hoping to win the magic lottery, to be the one piece of slush chosen out of a million (literally a million!) that goes on to be published and revered.

You deserve better than the dashed hopes of a magic lottery.

There's a hard work alternative to the magic lottery, one in which you can incrementally lay the groundwork and integrate into the system you say you want to work with. And yet instead of doing that work, our instinct is to demonize the person that wants to take away our ticket, to confuse the math of the situation (there are very few glass slippers available) with someone trying to slam the door in your faith/face.

You can either work yourself to point where you don't need the transom, or you can play a different game altogether, but throwing your stuff over the transom isn't worthy of the work you've done so far.

Starbucks didn't become Starbucks by getting discovered by Oprah Winfrey or being blessed by Warren Buffet when they only had a few stores. No, they plugged along. They raised bits of money here and there, flirted with disaster, added one store and then another, tweaked and measured and improved and repeated. Day by day, they dripped their way to success. No magic lottery.

What chance is there that Mark Cuban or Carlos Slim is going to agree to be your mentor, to open all doors and give you a shortcut to the top? Better, I think, to avoid wasting a moment of your time hoping for a fairy godmother. You're in a hurry and this is a dead end.

When someone encourages you to avoid the magic lottery, they're not criticizing your idea nor are they trying to shatter your faith or take away your hope. Instead, they're pointing out that shortcuts are rarely dependable (or particularly short) and that instead, perhaps, you should follow the longer, more deliberate, less magical path if you truly want to succeed.

If your business or your music or your art or your project is truly worth your energy and your passion, then don't sell it short by putting its future into a lottery ticket.

Here's another way to think about it: delight the audience you already have, amaze the customers you can already reach, dazzle the small investors who already trust you enough to listen to you. Take the permission you have and work your way up. Leaps look good in the movies, but in fact, success is mostly about finding a path and walking it one step at a time.
Posted by Unknown at 05:45 No comments:

I subscribe to this guy's blog. He has some useful stuff to say...worth a look.
Here's an example:


Shipping is fraught with risk and danger.

Every time you raise your hand, send an email, launch a product or make a suggestion, you're exposing yourself to criticism. Not just criticism, but the negative consequences that come with wasting money, annoying someone in power or making a fool of yourself.

It's no wonder we're afraid to ship.

It's not clear you have much choice, though. A life spent curled in a ball, hiding in the corner might seem less risky, but in fact it's certain to lead to ennui and eventually failure.

Since you're going to ship anyway, then, the question is: why bother indulging your fear?

In a long distance race, everyone gets tired. The winner is the runner who figures out where to put the tired, figures out how to store it away until after the race is over. Sure, he's tired. Everyone is. That's not the point. The point is to run.

Same thing is true for shipping, I think. Everyone is afraid. Where do you put the fear?
Posted by Unknown at 00:23 No comments:

Well worth making time for...

This is such a great metaphor for life...as well as being an amusing insight into the world of an uptight therapist! Grab a coffee, sit back & make 15 minutes for this little movie.

Our time is up
Posted by Unknown at 11:33 No comments:

I love this and hope you do too!

http://www.youtube.com/watch?v=JqOqo50LSZ0&feature=player_embedded
Posted by Unknown at 13:29 No comments: 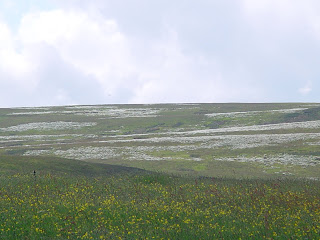 Well just how long between blogs can a person leave it?! The snow is long gone, the meadows are a sea of yellow, the fell tops are white with cotton grass and we have 2 goslings. All in all spring is well & truly sprung. We are still waiting on the hawthorn tree to blossom - less of a may tree & more of a june tree! What a contrast to the last entry here when life was very challenging. We are fast approaching the longest day when it hardly get's dark at all up here. All our vegetables are shooting up ...in short it really feels like the good life! I am off to the Network North Exhibition in Newcastle tomorrow where I am speaking as well as exhibiting...off to spread the word about Prydale!
Posted by Unknown at 14:04 No comments: